Bulgaria has already welcomed a large wave of refugees, with many wanting to remain in the country.

A new government has recently taken office with no prior experience dealing with such situations. The advantage of this is that the new government has been reaching out to NGOs and humanitarian organisations for advice on what they should do and what policies need to be amended. There is hope that this change could prove a vital opportunity to influence public policy and put early childhood development on the map for the new government. However, the government’s lack of experience seems to have been a disadvantage thus far. Civil organisations have deemed the government’s initial response to be chaotic.

Now NGOs in Bulgaria are working to support colleagues in neighbouring countries, especially Georgia and Moldova, who have been overwhelmed by refugees and have few resources at their disposal. Bulgarian organisations provide material support — such as humanitarian aid and transport and professional support to neighbouring countries that are assisting large numbers of refugee children and families.

As a result of the crisis and the political situation, many child-centred initiatives, and policies, such as the Child Guarantee, are currently on hold at the government level. Despite this, the national coordinators think that the Bulgarian coalition still has the resources to carry out a meaningful campaign.

The rising prices of food and electricity are of the utmost concern. Trust for Social Achievement indicates that these will severely impact the most vulnerable families and expect to see increased malnutrition rates in children. They believe that the lack of a comprehensive national program for food support that combines direct material support for low-income families with young children with consultations on healthy nutrition will be one of the pressing priorities we will aim to address.

Despite the increased focus on early childhood development in recent years, we believe the target group continuously overlooked in public policies is children aged 0-3 from vulnerable groups. There are very few targeted measures for this age group and a widespread lack of awareness that this is the most critical period to reverse the effects of being born in adversity. We believe that the First Years First Priority Campaign will help us bring more local evidence and focus on the earliest years.  – Iskra Stoykova, Trust for Social Achievement, Bulgaria.

It is clear that the refugee situation will worsen over the next few months and that this will negatively impact the country as a whole, and in particular vulnerable young children and families. Trust for Social Achievement will likely need to adapt its goals and operations to deal with this. 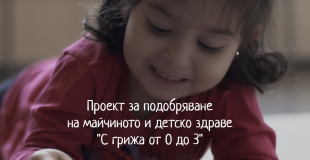