The impact of Covid-19 has caused an economic crisis in Romania in recent years. This has been exacerbated by soaring gas prices and, most recently, the war in Ukraine. Inflation affects vulnerable groups the most, as prohibitive costs make it harder and harder for people to provide food and shelter for their families, creating stress.

Organisations assisting Ukrainian refugees must be aware of the considerable price differences in Romania as this may affect people’s ability to purchase the basics and provide for the needs of their children. This is especially important to remember as the first wave of refugees tended to have more economic resources at their disposal, while the second wave of refugees includes many who lost everything.

To date, the Centrul Step by Step (CEPD) is not sure how the conflict will impact the advocacy of groups in Romania. However, the country has already welcomed over 600.000 Ukrainian refugees, and Government officials stated that the country is ready to host as many refugees as arrive.

Romanian advocates are most interested in creating a stronger will to implement the Child Guarantee Action Plan. They focus on securing economic support and access to education for the most vulnerable families. Along with these ongoing priorities, a new one has emerged – access to education and well-being programs for refugee children and families, as well as inclusion programs. The First Years First Priority Campaign is an essential driver in advocacy efforts in these areas.

“As a joint effort by organisations in several countries and international organisations, the campaign underlines the importance of early childhood and, at the same time, provides a common, stronger voice.” – Sorin Dragomir, CEPD, Romania

There has been an enormous effort to help refugees within civil society and a good balance of cooperation between the government and civil society in Romania. The main challenge is not knowing how many Ukrainians will come and how many will stay, which makes it hard to plan, especially for children who will require schooling.

In the experience of the organisations in Romania, the most traumatised group right now is the parents rather than the children, as parents are responsible for the lives of their children and can fully understand the situation and its implications — such as the reality of displacement, and for some having no home to which to return.

As a result, supporting the mental health of Ukrainian parents has been one of the main challenges for Romanian organisations so far, as stress has a tangible impact on their children. Where the children are concerned, Romanian organisations are currently trying to prioritise comfort and joy rather than lessons and education. Recovering from experiences of trauma can be harder than catching up after temporarily falling behind in the classroom.

Currently, Romanian organisations are trying to map how Ukrainian refugees are spread across the country. The map aims to provide a snapshot of those who will transit through Romania and help establish information about the needs of those who want to stay for a long time or even permanently in Romania. Several working groups have formed by the government and civil society to look at how refugee children can be helped and how they can benefit from the education they need.

CEPD is also part of an effort seeking to attract financial support and build a long-term strategy that works to support all disadvantaged children. The focus remains heavily on the fact that early childhood must remain on the public agenda, not only in the crisis generated by the war in Ukraine, but as a constant. 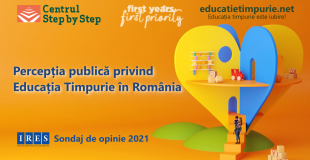